"Did you see that Kenneth Anger died?" Minnie crowed from the kitchen, where she'd spread the Village Voice on the chrome & mustard-yellow Formica table every Thursday afternoon.
I cleared my throat so my more temperate voice would project to the kitchen & asked, "Wouldn't someone have called us, Minnie?" I heard her hrumph in that way she has, as if close friends had been neglecting her for years, which couldn't have been further from the truth. "How did he die, does it say?"
"It's just a full-page advertisement, like you'd see for a holiday sale...all of page 30!"
Sure enough, page 29 held a review of John Boylan's play The Faggot, which we'd seen in rehearsals one afternoon the previous week, while page 31 had Andrew Sarris pontificating on Gone With the Wind & Jonas Mekas donning his urban Pan persona ("On many days this city is the patch of green grass I see on my way to the post office, on Eighth Avenue & 24th Street. I usually stand there for a while, trying to drink enough green with my eyes, just enough green energy of living grass to pull me through the day."). There between was the advertisement for the demise of our brother Kenneth Anger.
Last we'd heard from Ken, he'd tattooed the name of our beloved Lucifer on his chest & was living in the old William Westerfield house on Fulton Street in San Francisco, a house notorious for having housed a plush & perfectly wicked Russian nightclub named Dark Eyes in the 1920s (in fact -- among those in the know -- it is still called the "Russian Embassy").  He was in the planning stages of a film called Lucifer Rising & had pegged a young man named Bobby Beausoleil to play The Crowned & Conquering Child of the New Aeon. After this definitive statement from Ken himself, we heard nothing but gossip & all of it indicated immense turmoil had beset the life of our talented friend.
Though we never said the words out loud, I believe Minnie & I were both thinking that he'd killed himself.  That was certainly in keeping with some of the rumors we'd heard of his films being defiled or stolen, of his betrayal by that young man Beausoleil, though not really in keeping with what we knew to be Ken's temperament. He had a powerful will & it would be difficult to imagine him destroying himself in any way that did not involve a silver rocket flying directly into the sun. Shotguns, razor blades & nooses not implemented recreationally were certainly beneath him. On the other hand, there's only so much a soul can take when at the mercy of philistines. 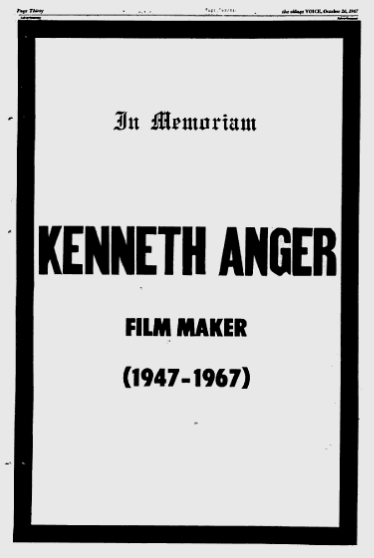 I'll admit we jumped the gun a bit by arranging an informal wake for Kenneth that very evening, but we didn't feel like being alone & we knew several friends who were apt to be as bereft as we were. We made a few phone calls & soon our living room was filled with the kind of cordial melancholy only those of our stripe seem able to muster. Being on intimate terms with Death & always gazing with admiration as shadows chase light from rooms, streets, cities & eventually the world, has rendered our occasional melancholia ambrosial. Our fast friend Rollo Ahmed, the infamous black sorcerer who had so impressed the author & noted occultist Dennis Wheatley years before, offered to tend the bar & he concocted a splendid symbolic beverage called The Last Word, which touchingly evoked all the complexity, color & decadence of our beloved Kenneth. A glowing green elixir, The Last Word was, we're told, all the rage in 1920s Detroit & Rollo had memorized the recipe from the classic cocktail book, Bottoms Up!

It was an exquisite, besotted evening, punctuated by delicious, unexpected laughter & the expected sullen silences. Though the Last Word is a rather complex cocktail, Rollo kept them coming in a manner that suggested other-worldly assistance. Just as all in attendance became to frayed by sorrow to continue in the revelry of this profane wake, a young man named Ivan -- whom we befriended when he worked at Film-Maker's Cinematheque on 4th Street -- showed up with a couple of young bohemian girls & imparted the wonderful news that Kenneth Anger lived! The advertisement was a hoax, though an honestly despairing one. Ivan informed us that Kenneth was indeed in a sorry state & that much of what we'd heard about his betrayal at the hands of Beausoleil seemed to be true (we later found out it wasn't entirely), but he was very much alive. We should, he said, consider this a death with the sworn promise of resurrection.
Of course, this changed the entire mood of the evening & Rollo commenced to mixing his now merrily named cocktail for the newly minted revelers.

Minnie & I often mix up The Last Word when we're reminded of Kenneth's fascinating & ongoing career & it has proved a perfect accompaniment for viewing his films in the wee hours. We hope you'll immerse yourself in Inauguration of the Pleasure Dome or Rabbit's Moon & imbibe as well!

If you're feeling adventurous, replace the gin with Templeton Rye Whiskey & the lime with lemon. Enjoy & Hail Satan! 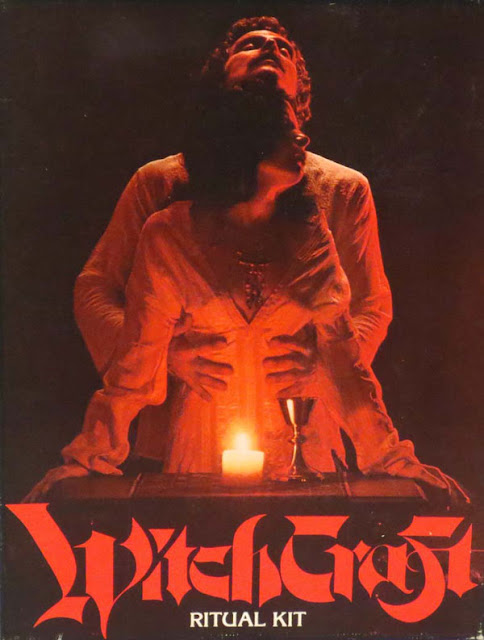 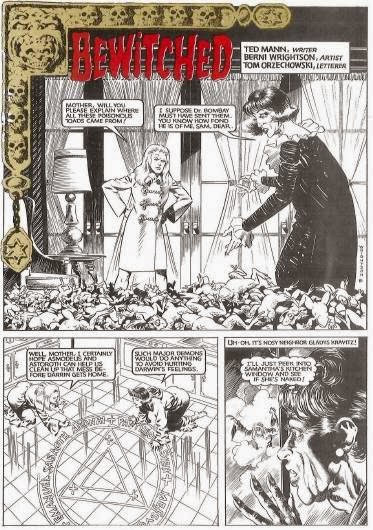